There are no external runtime dependencies and all required source code, totalling roughly 100k lines of (primarily) C, is included in this repository, save for Kuroko, which lives separately. 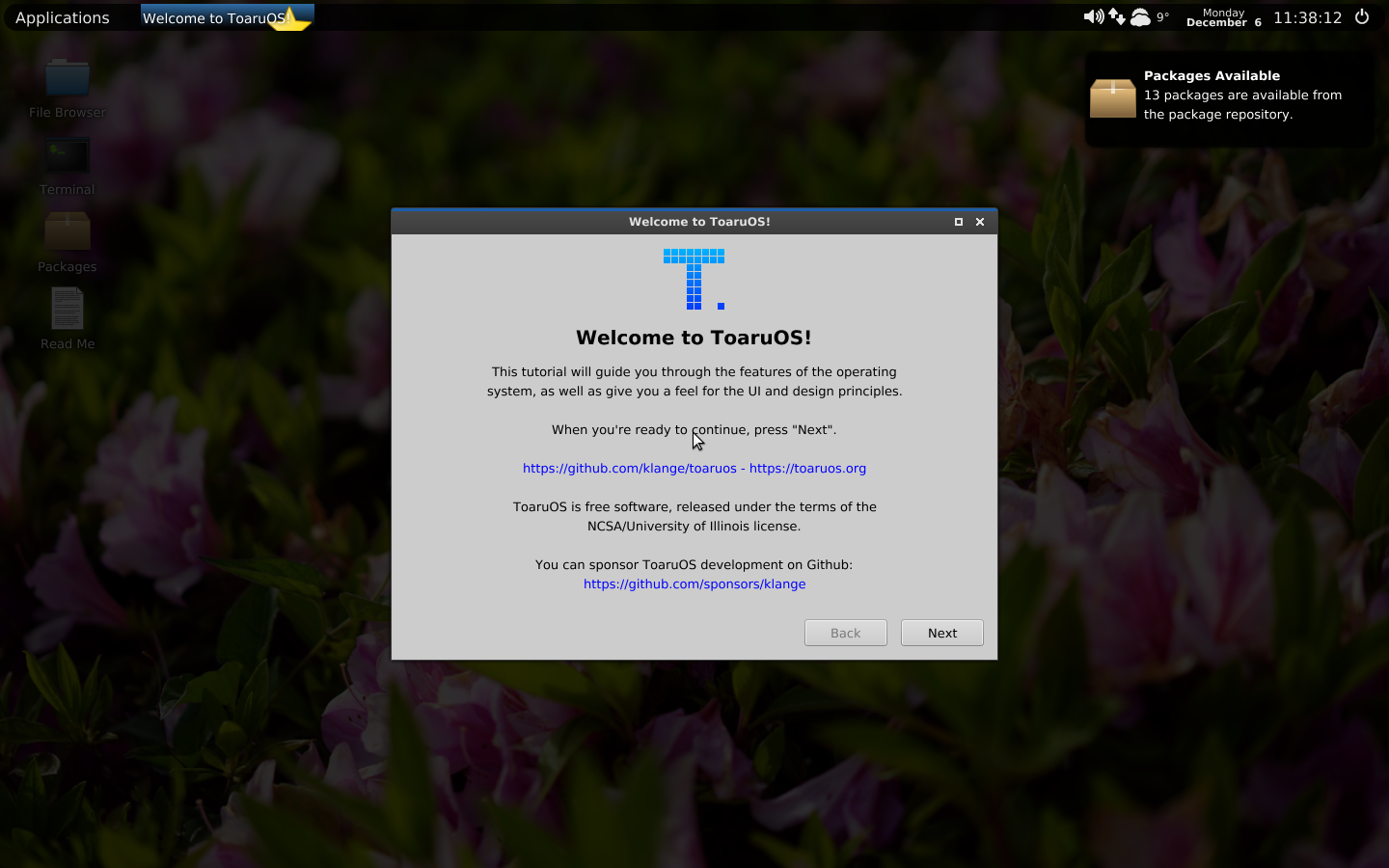 I have been working on ToaruOS for over a decade now, and my goals have changed over the years.

When I first started the project in December 2010, my aim was to "learn by doing" - studying Unix-like systems by making one from scratch. I had been a contributor to Compiz, one of the first widely-used compositing window managers for X11, a few years prior, and somewhat naturally ToaruOS gained a GUI built on similar concepts early on.

For its original 1.0 release in 2015, ToaruOS was not the "completely from scratch" OS it has since become. Newlib provided the libc, and the GUI was built on Cairo, libpng, and Freetype. In the middle of 2018, I started a new project to replace these third-party components, which was eventually completed and merged to become ToaruOS 1.6.

Through out the project, ToaruOS has also attracted quite a few beginner OS developers who have tried to use it as a reference. ToaruOS's kernel, however, was a source of personal embarrassment for me, and in April 2021, after a long hiatus, I began work on a new one. The result was Misaka: a new 64-bit, SMP-enabled kernel. Misaka was merged in May and started the 1.99 series of beta releases leading up to ToaruOS 2.0.

General users hoping to build ToaruOS from source are recommended to use the prebuilt Docker image, which contains all the necessary tools:

The root filesystem is set up as follows:

The best end-user experience with ToaruOS will be had in either of these virtual machines, as ToaruOS has support for their automatic display sizing and absolute mouse positioning.

Set up a new VM for an "other" 64-bit guest, supply it with at least 1GiB of RAM, attach the CD image, remove or ignore any hard disks, and select an Intel Gigabit NIC. Two or more CPUs are recommended, as well. 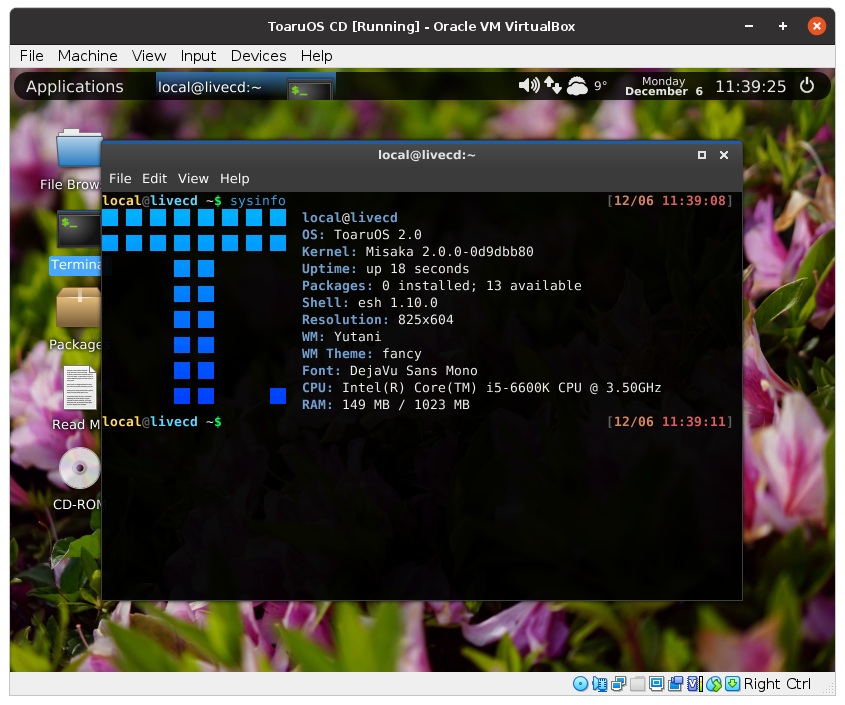 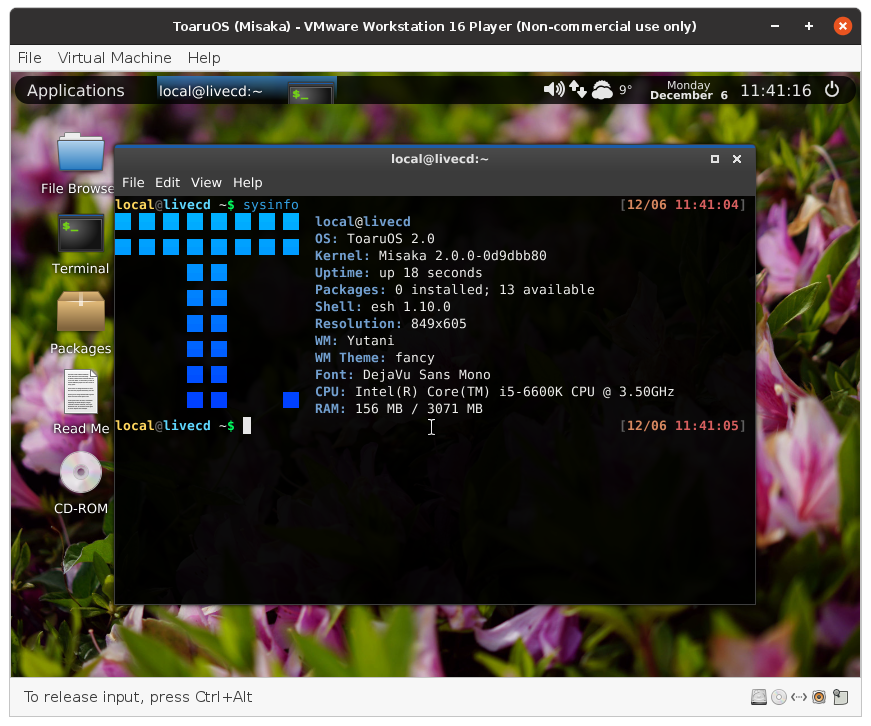 By default, the bootloader will pass a flag to the VirtualBox device driver to disable "Seamless" support as the implementation has a performance overhead. To enable Seamless mode, use the bootloader menu to check the "VirtualBox Seamless" option before booting. The menu also has options to disable automatic guest display sizing if you experience issues with this feature.

Most development of ToaruOS happens in QEMU, as it provides the most flexibility in hardware and the best debugging experience. A recommended QEMU command line in an Ubuntu 20.04 host is:

Replace -enable-kvm with -accel hvm or -accel haxm as appropriate on host platforms without KVM, or remove it to try under QEMU's TCG software emulation.

Note that QEMU command line options are not stable and these flags may produce warnings in newer versions.

The option -M q35 will replace the PIIX chipset emulation with a newer one, which has the side effect of switching the IDE controller for a SATA one. This can result in faster boot times at the expense of ToaruOS not being able to read its own CD at runtime until I get around to finishing my AHCI driver.

ToaruOS has been successfully tested on real hardware. If the native BIOS or EFI loaders fail to function, try booting with Grub. ToaruOS complies with the "Multiboot" and "Multiboot 2" specs so it may be loaded with either the multiboot or multiboot2 commands as follows: 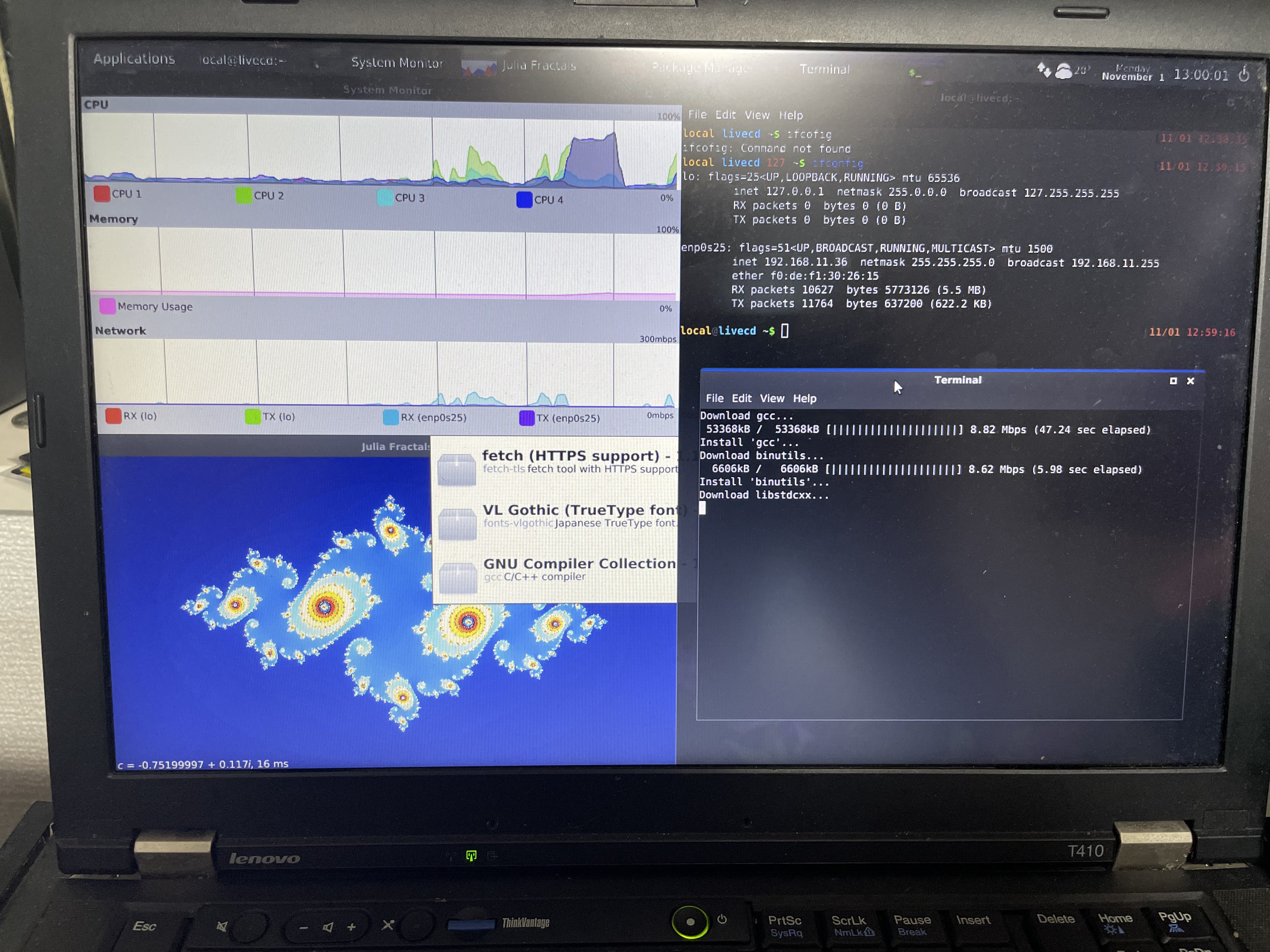 ToaruOS running natively from a USB stick on a ThinkPad T410.

All first-party parts of ToaruOS are made available under the terms of the University of Illinois / NCSA License, which is a BSD-style permissive license. Unless otherwise specified, this is the original and only license for all files in this repository - just because a file does not have a copyright header does not mean it isn't under this license. ToaruOS is intended as an educational reference, and I encourage the use of my code, but please be sure you follow the requirements of the license. You may redistribute code under the NCSA license, as well as make modifications to the code and sublicense it under other terms (such as the GPL, or a proprietary license), but you must always include the copyright notice specified in the license as well as make the full text of the license (it's only a couple paragraphs) available to end-users.

While most of ToaruOS is written entirely by myself, be sure to include other authors where relevant, such as with Mike's audio subsystem or Dale's string functions.

Some components of ToaruOS, such as Kuroko or bim have different but compatible terms.

Individual applications and libraries can be built by installing the build-essential metapackage from the repository, which will pull in gcc and binutils. Sources are available in the /src directory on the live CD in a similar layout to this repository, and the auto-dep.krk utility script is also available.

For building ramdisks, finalized kernels, or CD images, some components are currently unavailable. In particular, the build script for ramdisks is still written in Python and depends on its tarfile module and zlib support. Previously, with a capable compiler toolchain, ToaruOS 1.x was able to build its own kernel, userspace, libraries, and bootloader, and turn these into a working ISO CD image through a Python script that performed a similar function to the Makefile.

No, not all. There is no code from Linux anywhere in ToaruOS, nor were Linux sources used as a reference material.

ToaruOS is a completely independent project, and all code in this repository - which is the entire codebase of the operating system, including its kernel, bootloaders, libraries, and applications - is original, written by myself and a handful of contributors over the course of ten years. The complete source history, going back to when ToaruOS was nothing more than a baremetal "hello world" can be tracked through this git repository.

ToaruOS is complete in the sense that it covers the whole range of functionality for an OS: It is not "just a kernel" or "just a userspace".

ToaruOS is not complete in the sense of being "done".

While I aim to support POSIX interfaces well enough for software to be ported, strict implementation of the standard is not a major goal of the OS, and full compliance may even be undesirable.

ToaruOS is a personal project, not a community project. Contributions in the form of code should be discussed in advance. Ports and other work outside of the repo, however, are a great way to help out.

You can also help by contributing to Kuroko - which is part of why it's kept as a separate repository.