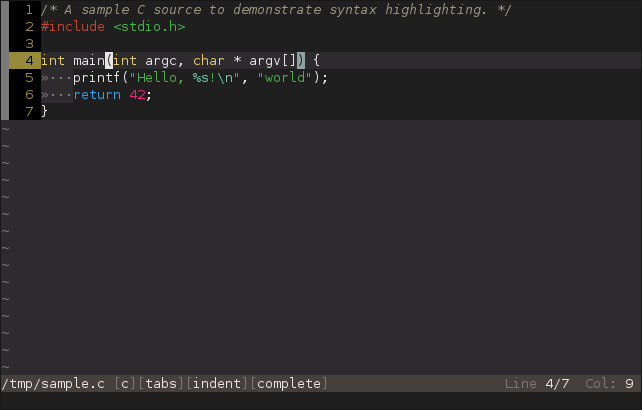 Bim is a terminal text editor with syntax highlighting.

Inspired by Vim (one might say a Bad Imitation) and featuring similar mode-based editing, Bim was originally written for ToaruOS, but it has also been tested in Linux, Sortix, FreeBSD, and macOS.

Bim is intended as the included text editor in ToaruOS, a hobby operating system built from scratch.

Bim aims to be lightweight and featureful with no external* dependencies, providing a modern editing experience in a lightweight, extensible package.

Bim requires a sufficiently Unix-like C library and a C99 compiler with certain GNU extensions (such as __attribute__((constructor))).

Additionally, in this and future versions, a system installation of Kuroko is needed.

Bim has been built successfully for a number of targets, including various BSDs, ToaruOS, Sortix, and others.

Then install the example config:

Bim has been tested in a number of terminals, and while it does not use terminfo databases, basic functionality should be available in the vast majority of remnant emulators and even classic DEC hardware.

If the terminal you are using has some quirks or does not play well with the default assumptions, you can modify the behavior to suit your environment.

Capability features can be controlled with "quirks", either through the quirk command in a bimrc, or with the -O command line option.

For example, quirk('TERM','xterm','nounicode') will disable Unicode output on all terminals starting with "xterm" (including "xterm-256color").

You may also specifies quirks with the $COLORTERM environment variable, or the $TERMINAL_EMULATOR variable set by certain IDEs.

Some example quirk configurations are provided in docs/example.bim3rc and may be a good place to start if you are experiencing rendering issues.

Unicode/UTF-8 support is recommended and assumed by default. The nounicode quirk option will disable output of UTF-8 characters and render them as codepoint hints like <U+1234> instead.

256-color and 24-bit color are also assumed by default, disable them with the no256color and no24bit quirks respectively.

If you have a particularly low-color terminal, the nobright quirk will hint to themes that only the lower 8 colors should be used.

If neither scrolling option is available, use the noscroll quirk to redraw the text field when scrolling. This will probably be slow!

Mouse support with ^[[?1000h is assumed by default. Use the nomouse quirk to disable it.

If your terminal supports SGR mouse modes ("1006"), enable the cansgrmouse quirk. Most xterm-like terminals support this and it will provide support for click on cells in larger terminal windows.

Alternate screen support is also assumed. This is normally fine even if your terminal doesn't support it, but if it causes issues the noaltscreen quirk will disable it.

Default keybindings can be found in docs/mappings.md.

This listing can be generated with bim --dump-mappings.

A complete listing of available commands can be found in docs/commands.md.

This listing can be generated with bim --dump-commands.

You can use Bim to display files in your terminal with syntax highlighting with bim -c (no line numbers) and bim -C (with line numbers). 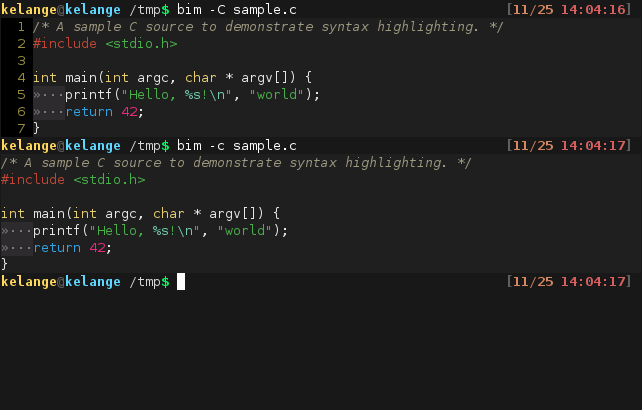 You can pipe text to bim for editing with bim -. Note that Bim will wait for end-of-file before launching, so this is not suitable for use as a pager (pager support is planned).

Bim can also be used to generate HTML documents with syntax-highlighted source code with bim --html; the configured theme will be used.

Bim includes a handful of color schemes for the interface and syntax highlighting.

A plain 16-color theme. Can be configured for use on terminals with or without bright color support. Looks a bit like Irssi. 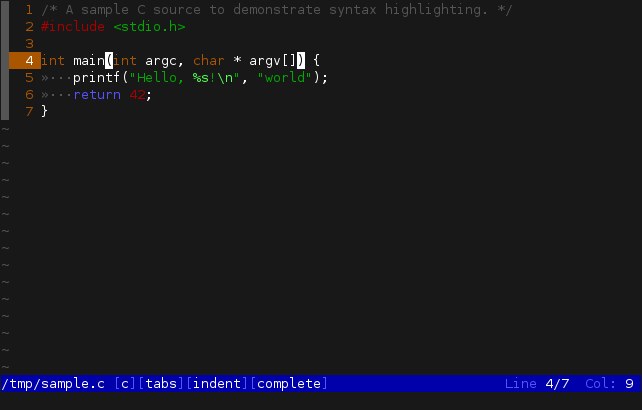 A 256-color version of Sunsmoke for use in terminals that do not support 24-bit color. 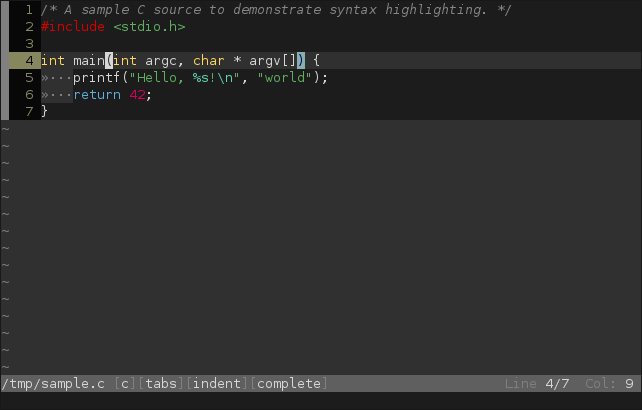 A 256-color theme based on the theme of the same name for Vim. 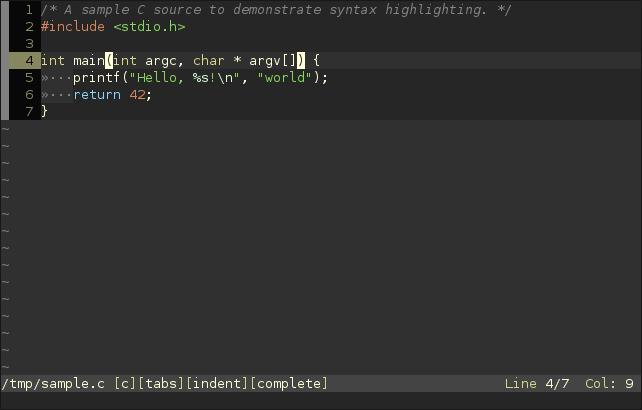 A 24-bit color theme based on the popular color palette. 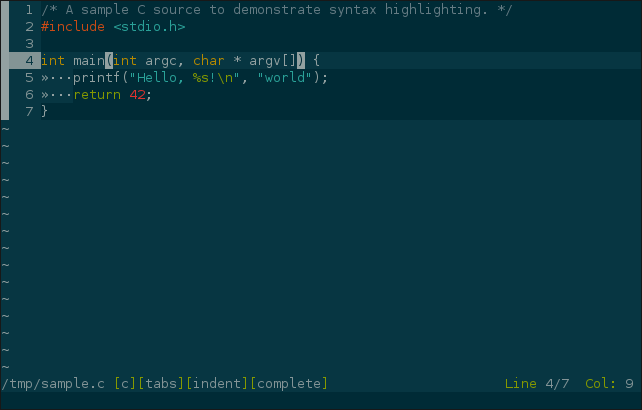 A 24-bit color theme based on the one for Atom and Sublime, featuring low contrast blues. 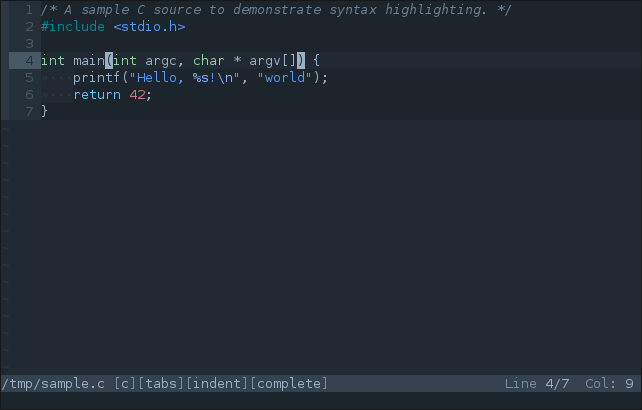 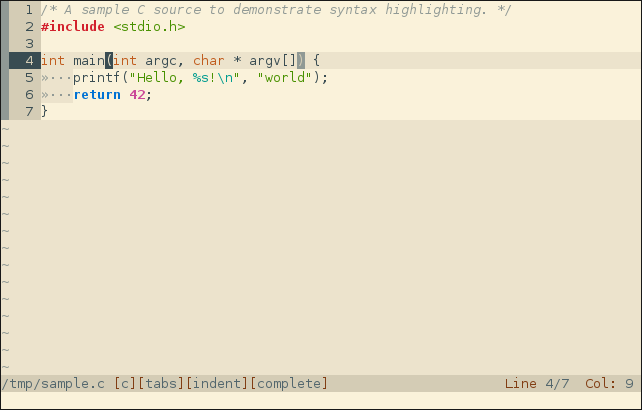 Bim will automatically run commands from ~/.bim3rc on startup.

Bim scripts are written in Kuroko.

Not all syntax highlighters are complete or support all features of their respective languages.

Syntax highlighters and themes are written in Kuroko and found in the syntax and themes directories.

Bim is not Vim

Some interactions in Bim work differently from Vim, and sometimes this is intentional. Bim's primary interactions are built around a selection, while Vim has verbs and navigation nouns. CHAR SELECTION does not let the cursor move past the end of the line, unlike VISUAL mode in Vim.

Some interactions in Bim work differently from Vim, and sometimes this is unintentional. Bim is missing many features I would like to implement, like regular expression search (and replacement).

Bim is released under the terms of the ISC license, which is a simple BSD-style license. See LICENSE for details.

Bim is still primarily developed alongside ToaruOS. This repository is a mirror with fake history going back to the start of that project. Pull requests merged here will be patched into ToaruOS.

If you're using Bim, want to contribute to development, or have ideas for new features, join us in #bim on Libera.